Where are today's "famous" Freemasons?

*** Courtesy of the The Widow's Son Burning Taper blogspot *** 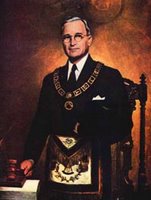 "We represent a fraternity which believes in justice and truth and honorable action in your community... men who are endeavoring to be better citizens... [and] to make a great country greater. This is the only institution in the world where we can meet on the level all sorts of people who want to live rightly."— Harry S Truman, 33rd President of the United States

This list is a compilation from several sources, and no claims are made as to its accuracy. A few famous people who have been rumored to be Freemasons but for which no evidence can be found include presidents George Herbert Walker Bush, Bill Clinton, Thomas Jefferson, Abraham Lincoln, Ronald Reagan and Lyndon Johnson, along with Thomas Paine, Neil Armstrong, Walt Disney, Charlie Chaplin, Bob Hope, Ringo Starr, Rev. Billy Graham, and Charles Taze Russell, the founder of Jehovah's Witnesses.

George H.W. Bush was sworn in as president on George Washington's Bible, which belongs to the St. John's Lodge of New York City. Clinton was a member of the Order of DeMolay as a teen, but never joined a masonic lodge. LBJ took his first degree in 1937, but never became a Fellowcraft or Master Mason apparently due to lack of time to pursue both his Congressional duties and his Masonic studies. Lincoln petitioned a lodge but withdrew his petition before being accepted, apparently to keep from appearing to be wanting to join for political reasons. In 1988, Reagan was given a Certificate of Honor from the Grand Lodge of Washington, D.C., and made an honorary member of the Scottish Rite and of the Imperial Shrine, but was never a Mason. See MasonicInfo.com for more information about famous Masons and non-Masons.

As I'm pasting into the blog this list I compiled several years ago, I'm struck by the fact that there are so few — two, actually (the actor Michael Richards and football star John Elway) — men on this list from my generation, or from "modern times." Are there are any "famous" Freemasons anymore, men known for high achievement in their chosen fields who are also Masons?